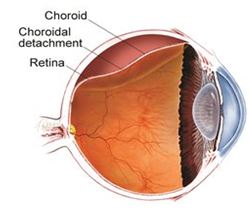 The choroid is the vascular layer of the eye that lies between the retina and the sclera. The choroid is thickest in the back of the eye at about 0.2 mm and narrows to 0.1 mm in the peripheral part of the eye. It contains the retinal pigmented epithelial cells and provides oxygen and nourishment to the outer retina. The choroid forms the uveal tract which includes the iris and the ciliary body.

The choroid is made of four different layers:

The dark-colored melanin pigment in the choroid absorbs light and limits reflections within the eye that could degrade vision. ï»¿The melanin is also thought to protect the choroidal blood vessels against light toxicity. The choroidal pigment is what causes "red eyes" when flashed pictures are taken.

Diseases and Disorders of the Choroid